LMFM is the licensed radio service for a franchise area which covers the counties of Louth and Meath. It launched on September 3rd 1989.

The studios are based in Drogheda in Co Louth and it is owned by UTV.

In 1997 they ran a short-lived opt-out service for east Meath called Fresh FM on 95.5MHz from studios on Clonee. This was an unofficial attempt to penetrate Dublin.

LMFM Radio is the licensed service for the counties of Louth and Meath. It first broadcast on 4th September 1989 and has a much more varied offering than the equivalent licensed services in Dublin. Worth a listen but you won’t be rushing to set up home in its franchise area. Music is aimed at over 25s.

LMFM in the Newspapers

His dulcet tones greeting the town with ‘Hello There’ were as synonymous with Drogheda as Oliver Plunkett’s head, Laurence’s Gate or Millmount.

Tributes were paid from right across the world of Irish Country music and beyond to the former LMFM radio presenter Dermot Finglas, who died last Wednesday.

The broadcasting great is survived by his wife Maria, and a circle of family, friends and fans from his career which spanned almost 40 years.

“He was a likeable, easy-going and very obliging person, who would do anything for you,” said ‘Heady’ Eddie Caffrey, Dermot’s colleague in local radio since 1979.

“Of course, he also had that amazing voice, and the passion for country music, which of course is so popular in the North East, making his weekday show one of the most listened to on the station for decades.”

Former Presidential hopeful Gavin Duffy says he knew from the minute he heard Dermot’s voice he was destined for broadcasting.

“I was just 18 years old and working in (pirate radio station) Boyneside Radio, when one day I passed someone delivering coal in Donaghy’s Mill,” explains Gavin. “I said hello, and this man replied ‘Hello There’ in this incredible voice, and I just stopped in my tracks and asked him had he ever thought of working in radio. He auditioned with us that weekend, and the rest, as they say, was history.”

At the peak of his career, Dermot’s popular midweek country music show ‘Country ‘n Irish’ aired every evening from Monday to Friday (7pm-9pm), attracting audiences of thousands from all over Ireland.

As well as showcasing the best in local, national and international country music, he interviewed all the greats from Big Tom to Dolly Parton.

“He was the yardstick for anyone wanting to get into the business yet was a man of the people and never looked down on anyone. Every Christmas eve you would get a phonecall to wish you a happy Christmas,” he told the Drogheda Independent.

“He had a huge volume of listeners and will be sadly missed by all who knew him.”

Dermot was also in demand as a compere, where his velvet tones added gravitas to many events all over the northeast.

In 2006, Dermot scaled back his show from daily to broadcast only on Sundays and his final show aired in 2016.

Dermot did so much for so many groups, not least St Ita’s school.

He always acted as the MC for their raffles and always visiting the school. He organised a Country and Western show in the TLT as part of their campaign to raise funds for a new minibus.

THE VIADUCT, Millmount, St Laurence Gate and Eddie Caffrey…! ‘
Heady Eddie’ Caffrey is as synonymous with Drogheda as any of its other well-known landmarks, if not quite as long on the go. His hugely popular ‘ Green Scene’ Irish music show on LMFM, broadcast on a Saturday morning, draws massive and loyal audiences, and an afternoon in Louth or Meath wouldn’t be same without his friendly tones hosting The Drive. Strange then that the Voice of Radio in Drogheda is actually a Togher man and it was far from the ‘ heady’ music scene that he started his working life. Mum was Rosaleen Carter from the Chord Road, who married his dad Tommy Caffrey – a stalwart of the accordion band scene – and settled initially in the mid-louth townland.

‘Would you believe my first job was packing porridge in Annagssan Mills at the age of 13,’ recalled Eddie. ‘ The radio was always on in the mill during the afternoon, and I think that’s where my love for it came from – that and listening to the new pirate stations like Radio Caroline, which were becoming an exciting alternative to what we had in Ireland.’

Even though the infamous Radio Caroline was based in a boat off the coast of the Isle of Man, it was owned by Louth businessman Ronan O’Rahilly and had a high Irish music content.

The young Eddie already had ‘ the gra for the diddley-ildle music’ and his sights seemed firmly set on a broadcasting career.
‘At that stage, I was about 15 or 16 and going to the record shops in the old school in Sandpit. The DJs then were god-like!
You had Franklin D (Frank Godfrey), Richie ‘Mccool’ Mccullen and Smily (Liam) Reilly.

‘I was looking at them one night and I thought ‘ I could do that’ so I bought my first gear from Tommy Leddy and I suppose the rest is history.’

No one used their own name on radio or the DJ circuit back then, so the first thing the newbie jock had to acquire (after his homemade decks) was a nickname, which first appeared in the Drogheda Independent!

‘ They all had zany names – like Leapy Larry (Carr) – and a friend of mine Kevin Gibney said he could get me a write-up in the Local Scene section of the DI,’ he says with a laugh. ‘When he asked me what name I was using, I told him DJ Eddie, and he replied, “you’ll have to come up with something better than that, like ‘Headie Eddie'” and it stuck!
‘I’ll still be walking across the town sometimes and someone would shout “hiya Headie!”‘

By 1978, pirate radio had hit Louth in the shape of Radio Carousel, housed upstairs in the original Dundalk shopping centre.

‘Some of the names who were to go onto appear on radio in Drogheda started there, like Gavin Duffy and Dick Newman (Michael Comyn),’ he said,’ but we had to wait another year until we got radio in Drogheda, when LRD (Local Radio Drogheda) started in 1978.

‘ The first studios were in the attic of Donaghy’s Mill, which was owned by station-founder Eoibheann Mcdonnell, and Gavin came to join us and Michael (now David Browne), as well as others like Paddy Everitt, Martin Kirwan and Aine Carberry.’

The studios had to be seen to be believed, with egg cartons on the walls to add soundproofing, and a precarious climb up a ladder to access the attic!

‘With all the other pirate stations in Dublin being raided at some stage, we were lucky to have escaped until 1979, and even when the P&T (Post and Telegraphs) van threatened to raid one day, Eoibheann told them he would go straight over and tell the P&T workers, who were striking, and they left us alone after that!’

The station went from strength to strength after that, gaining more and more listeners and followers.
‘I had my Afternoon Delight programme at that stage, and a young fella called Ken Murray won a competition to become a DJ, and another fella calling himself Richard Kenny was also there, who many people might know now as Richard Crowley from RTE Primetime!
‘Ken had the idea for the Irish music programme, as we were getting so many requests for the old traditional songs, and presented the programme until 1982, so when he left, I stepped in, and so by default have been presenting it for 30 years this May!’

The name was changed to Boyneside Radio in 1980 and Eddie was chief technician by then, responsible for transmitters right up until the station became ‘ legal’ in 1989. Eddie naturally became one of the main presenters when LMFM began and his Green Scene Saturday morning show was, and still is, one of the most popular programmes on the station.

‘It’s a tradition now – part of the furniture,’ he said with a laugh. ‘I have regular listeners, like the Murray’s of 248 Marian Park, who I’ve been playing requests for first day at school, then Confirmation, then weddings – whole generations of families who are loyal to the show. ‘ They are the type of people I care most about, although I’ve been lucky to meet a few famous people like Rolf Harris and Roger Whitaker who stuck in my memory as gentlemen.’

Eddie is of course a family man now too, having married Tina in 1984, and they have three daughters: Stephanie, who is in rock band ‘Black Daisy’, Arlene, who is a graphic designer and Amy, who is in Greenhills.

He describes his 35 year career in broadcasting as a rollercoaster ride – particularly the early days of pirate radio when you were never quite sure how long you would last.
‘We thought back then if we got six months it would be great, then a year – fantastic! But to span over three decades is incredible,’ he said. ‘We sowed the seed for so many other stations, being first with local news, first with Vox Pops and chats shows, not to mention local television.’

With the 30th anniversary of the Green Scene fast approaching, will Headie Eddie ever tire of this local institution?
‘I’ll never get tired of the Green Scene,’ he said, with more than a hint of emotion. ‘As long as we have listeners, it’ll go on and on, and now with people listening on the internet from places like Boston, Bulgaria and Australia, it seems people still want to hear a bit of the oul diddley-idle from home.’ 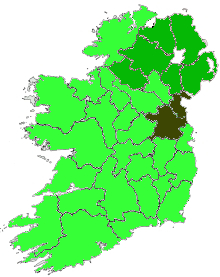