North West Radio broadcast to an area encompassing Sligo, North Leitrim and South Donegal, It was the last of the country’s licensed local stations to come on air in the first round of licences following the 1988 pirate shake-up. It is no longer on air.

Based in Sligo, the station started broadcasting on November 2nd 1990 on 102.5MHz.

It was the first franchise area where a licence was awarded to a consortium which includes groups already involved in independent broadcasting – the franchise is partly owned by Midwest Radio. This followed the original franchise winners handing back the licence as they did not consider it viable.
Programmes were also shared between the two stations with twelve hours programming coming from the Sligo studios and six from Midwest, with an opt-out each day for 90 minutes to broadcast their own programming.

All Donegal Democrat – tap to enlarge 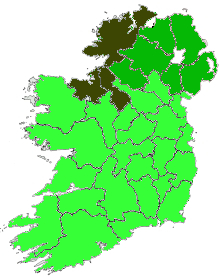